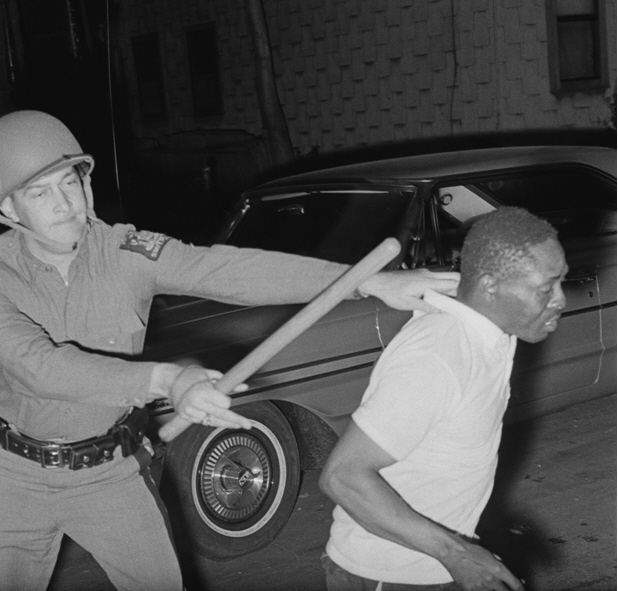 I was born in the black area of Los Angeles and at 12 years of age lived a few blocks from Watts, but most of my recreational activity took place in Watts in 1965. In the parade exactly one year after the riots, I carried the American flag in my Boy Scout uniform down Central Avenue. It represented a true dichotomy of belief that the community was riddled with confusion as to how to live together.

The manner in which Los Angeles dealt with the riots has been at a minimum one large joke, since you can go through any area of Watts and show side by side pictures or take statistical comparison on unemployment rates, educational levels and the like and you will find the same from 1965. Where actually you find it to be lesser than 1965 since people then were making new strides in all sorts of areas of commerce and education.

Even though the population remains constant in Watts from fifty years ago, it is estimated at 41,028, with the median age being 21 years of age, making Watts the Los Angeles neighborhood with the youngest population. But, since the riots commerce is basically non-existent compared to 1965. People looted televisions, bicycles, household appliances, home furnishings, clothes, fresh meat/produce/foodstuff, and much more. That was then, but you could never bring home big assets like that today from the Watts area, no matter how awful the looting or rioting.

A simple measurement of the amount of businesses that were set on fire and if the same thing occurred you would not be able to even come to half the numbers of businesses if you destroyed all that now exist. The bottom line is that no entrepreneurs choose to operate in Watts. The Watts Health Foundation is the most consistent large employer since the riots, although Kaiser Permanente has recently added a medical care facility next door to WattsHealth.

Operating in this 2.12 square mile community, nothing is revolutionary to positive change as there are still a dozen or so churches still open only on Sunday, all of which surround two fire stations, one public library, one gas station, one full-scale grocery market, one sit-down comfort food restaurant (Watts Coffee House), a full scale county welfare office, one county park (no city parks), one post office, three high schools, one private high school, one middle school, seven elementary schools, one private elementary school, three large poorly maintained housing projects, three pharmacies, one bank and six ATM’s, a Burger King, a Subway, a McDonald’s, a Chinese Express, and a Popeye’s.

Visibly absent in the heart of Watts are businesses like hotels/motels, auto/supply dealers, entertainment facilities like movie theaters, dry cleaners, which are common everywhere else in Los Angeles. There is no Dollar Tree or 99¢ franchises, Goodwill Outlets, or major Hardware Stores. Even Starbucks has decided not to operate in Watts, although locating a couple of stores nearby at a distance of 2 miles away.

Accordingly, having grown up and worked in Watts, I am now of the mindset to stop the nonsense of ever believing that Watts will one day prosper. Moving forward, if respect for Watts’residents is to occus, which is too long coming, the best thing is shift the bulk of the people to geographically distant upgraded living conditions and turn Watts into an airport, a major sports complex, or anything with a huge footprint that will show global praise. To consider keeping it the same and modifying the commercial – residential mix is never going to make sense or bring value to the 34 people who died and the thousands like me who suffer over the movement for positive socioeconomic change.