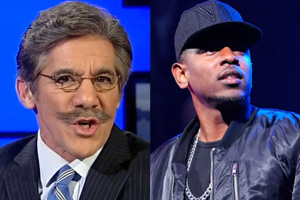 On Fox News’ “The Five” Monday night, Geraldo Rivera criticized Kendrick Lamar’s performance at the BET awards — in which he rapped about police brutality in “Alright” — saying that his lyrics are “not helpful, to say the least.”
“This is why I say that hip-hop has done more damage to young African-Americans than racism in recent years,” he added. “This is exactly the wrong message.”

The “message” in question was Lamar’s line that “We hate the po-po/Wanna kill us dead in the street fo sho.” According to Geraldo — who previously stated that Trayvon Martin’s hoodie was as responsible for his death as George Zimmerman — lyrics like those “conflate what happened in this church in South Carolina with these tragic incidents involving excessive use of force by cops is to equate this racist killer with these cops.”

“It is so wrong,” he said, “so counterproductive — it gives exactly the wrong message. It doesn’t recognize that a city like Baltimore, which is just 7 percent the size of New York, has just as many murders as New York.”
Mustachioed Fox News commentator/Al Capone vault raider/hoodie-blamer Geraldo Rivera, is not a fan of Kendrick Lamar. Rivera spoke out against the rapper following his performance at the BET Awards earlier this week, and opined that “hip-hop has done more damage to young African-Americans than racism in recent years.” Lamar, being a smart person, disagreed with Rivera’s blanket statements, and responded to his criticism during a Thursday appearance on TMZ Live:
This is our music. This is us expressing ourselves. Rather [than] going out here and doing the murders myself, I want to express myself in a positive light the same way other artists are doing. Not going out in the streets, go in the booth and talking about the situation and hoping these kids can find some type of influence on it in a positive manner. Coming from these streets and coming from these neighborhoods, we’re taking our talents and putting ‘em inside the studio.

Geraldo Rivera does not understand anything about why black people in general are damaged. It is not the music because if you remember the music of the times when blacks took it the streets way more than today, the music was all about love and relationships.

There was no profanity and everything was well choreographed and at the same time it really influenced blacks at that time. Nonetheless, black panthers, Black Muslims, SNCC, US and other organizations were part of the culture that found it necessary to fight for civil liberties, no different than today’s youth wanting respect from a racist society.

Geraldo Rivera should keep his views to himself until he is ready to promote positive change and use his media influence for good instead of spreading senseless banter.