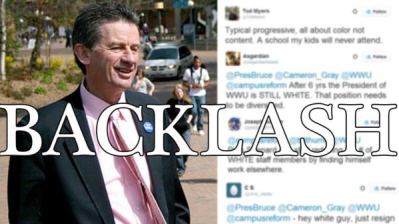 BELLINGHAM, WASH. — Western Washington University President Bruce Shepard says he’s being deliberately provocative when he says the university is too white. The lack of diversity on college campuses a national crisis, he says.

Most of the email and calls he receives on the issue support diversity but some critics use hate language and racial epithets, said Shepard, who is white.

In a convocation speech, referring to the racial make-up of the school, Shepard said, “…if in decades ahead, we are as white as we are today, we will have failed as a university.” He made a similar comment in a blog posting.

On the university’s website, he posed the question, “How do we make sure that in future years we are not as white as we are today?”

Conservative blogs, publications and commentators have picked up on the story on campusreform.org, said Caleb Bonham, editor-in-chief of the media organization for conservative college students.

“I think he’s being very insensitive to how people are perceived based on the color of their skin,” Bonham said.

“I needed to provoke some attention,” he said. “It’s really important to understand the issue facing all of American higher education and that is, our country is changing.”

WWU must attract minority students to remain competitive, economically healthy, and because it’s the right thing to do, Shepard said.

Shepard says he welcomes a vigorous and respectful debate on the issue of diversity.

The university in Bellingham, in northwest Washington, has about 15,000 students.

In a convocation speech, Shepard said ” … if in decades ahead, we are as white as we are today, we will have failed as a university.” He expressed similar sentiments in a blog posting.

Conservative bloggers and commentators have since picked up on a story about the comments on campusreform.org, a media organization for conservative college students.

Shepard, who is a longtime champion of efforts to attract more minority students to WWU, is making no apologies over his statements.

He called the lack of diversity on college campuses a national crisis and says that WWU must attract more minority students to remain competitive and economically healthy. Plus, it’s the right thing to do, he said. 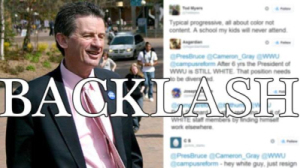