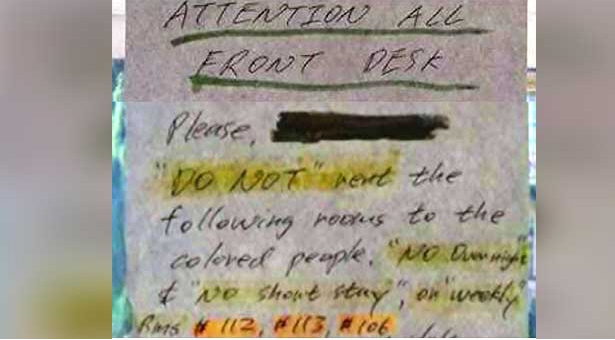 EXPOSITION PARK (CBSLA.com) — A former employee of a motel in Exposition Park expressed outrage over a sign she says was put up that informed employees not to rent certain rooms to “colored people.”

The sign read: “Please do not rent the following rooms to the colored people. ‘No overnight’ & ‘No short stay’, or ‘Weekly rooms’ … ”

Hoffman says she read the sign on her first day as a front desk clerk Aug. 2. She said the room numbers on the sign referred to the bigger, cleaner, remodeled rooms.

“They’re discriminating against race. It’s not right. We are in Los Angeles, California. This is 2015. It’s predominantly an African-American neighborhood,” she said.

Hoffman says she asked the manager why the sign was put up.

She said she was told “because they had a problem with some people.”

When Hoffman complained about it the next day, she said the manager took it down.

But, she says, when she came back to work on Aug. 9 with her husband James, Hoffman said the owner came by, greeted her quickly, then left minutes later.

“Not even five minutes later, the manager’s calling the motel saying the owner does not want me working there,” she said.

When asked why she believes she was terminated, Hoffman said: “Because my husband is black, my significant other is black, and because I questioned their sign.”

The manager was off Monday, but CBS2 reached out to him for comment. That call wasn’t returned. He did, however, call Hoffman while a news crew was with her.

“They’re right here. Would you like to speak to them,” Hoffman asked. CBS2’s Rachel Kim spoke with the manager, Leon, over the phone who didn’t deny the sign was put up.

But, as Kim reports, he was very hesitant to speak and said any other information would need to come from his boss.

Leon and another motel employee told Kim they would pass along the news station’s contact information to the owners. CBS2 has not heard back. 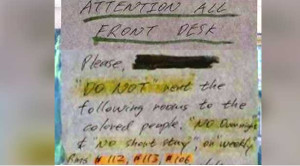