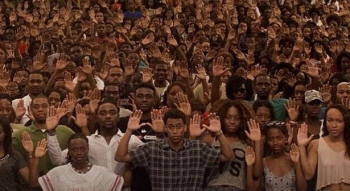 LOUIS (AP) – Thousands gathered Saturday for a second day of organized rallies and marches protesting Michael Brown’s death and other fatal police shootings in the St. Louis area and elsewhere.

Marchers started assembling in the morning hours in downtown St. Louis, where later in the day the Cardinals were set to host the San Francisco Giants in the first game of the National League Championship Series.

Four days of events are planned. They started Friday afternoon with a march outside the St. Louis County prosecutor’s office in Clayton. Protesters renewed calls for prosecutor Bob McCulloch to charge Darren Wilson, a white Ferguson officer, in the Aug. 9 death of Brown, a black, unarmed 18-year-old. A grand jury is reviewing the case and the Justice Department has opened a civil rights investigation.

“We still are knee deep in this situation,” said Kareem Jackson, a St. Louis rap artist and community organizer whose stage name is Tef Poe. “We have not packed up our bags, we have not gone home. This is not a fly-by-night moment. This is not a made-for-TV revolution. This is real people standing up to a real problem and saying, ‘We ain’t taking it no more.'”

The downtown march came hours before the Cardinals game at Busch Stadium, just blocks from the protest route. St. Louis Police Chief Sam Dotson said the city had enlisted extra officers and was prepared for trouble, though he hoped for the best.

Earlier in the week, a small group of protesters verbally clashed with Cardinals fans who support the Ferguson officer outside the stadium.

He said the city also will bolster its police presence when the St. Louis Rams host the San Francisco 49ers in a nationally televised game Monday night – the same day protesters are planning organized acts of civil disobedience.

The crowd Saturday was significantly larger than the ones seen at Friday’s protests in Ferguson and Clayton. While the main focus of the march was on recent police shootings, participants also embraced such causes as gay rights and the Israeli-Palestinian conflict. Police reported no arrests or violence Saturday afternoon.

“I have two sons and a daughter. I want a world for them where the people who are supposed to be community helpers are actually helping, where they can trust those people to protect and serve rather than control and repress,” said Ashlee Wiest-Laird, 48, a Baptist pastor from Boston.

The situation in Missouri especially resonated with Wiest-Laird. She’s white and her adopted sons, ages 14 and 11, are black.

“What I see happening here is a moment in time. There’s something bigger here,” she said.

Organizers said beforehand that they expected as many as 6,000 to 10,000 participants for the weekend’s events. Police were not able to provide a crowd estimate Saturday, but organizers and participants suggested the march’s size may have approached as many as 3,000.

Since Brown’s death, three other fatal police shootings of black males have occurred in the St. Louis area. The most recent happened Wednesday night on St. Louis’ south side when police say an off-duty city officer working for a private neighborhood security patrol shot and killed 18-year-old Vonderrit D. Myers. 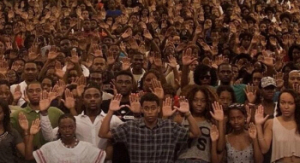