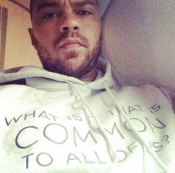 Jesse Williams is not only quite the entertainer, but he’s quite the social activist — having protested in Ferguson and being outspoken about race and racism in America.

This time around he took to Twitter to announce his frustration with Trayvon Martin costumes and the lack thereof sensitivity towards the black human experience.

He expressed how he felt about the shooting of black teen Mike Brown — condemning the white officer Darren Wilson for murdering the teenager.

Last week, the autopsy was released and corresponded with Wilson’s story about what happened in the police car and that there was a fight between the officer and teen. But Williams said it didn’t justify taking the kid’s life.

Williams expressed his concerns about these injustices on his Twitter account with a series of tweets, which can be read below:

“Why do so many of you reflexively defend, identify w/, and antagonize on behalf of whiteness whenever blackness is involved?”

“You don’t feel compelled to justify every thing done by everyone who happens to be straight or male or right-handed. So why whiteness?”

“What about black pain is so fun to you? From where is that joy derived?”

“When Halloween comes around, how exactly does dressing as Trayvon and other illustrations of black pain, make you feel? Please be specific.”

“We don’t reflexively celebrate random or routine white death, make memes of your bleeding corpses, etc. Tell us about this unique obsession.”

“Millions of you smile in awe of our music, comedy, inventions, athletics, fashion, etc. but when we’re not entertaining you, you hate us?”

“How is the fact that police are killing 400 people a year not worthy of investigation and remedy?”

“From 2006-2012 a white police officer killed a black PERSON at least twice a week in this country. By saying so, I have not attacked you.”

“By asking that laws protect citizens from publicly sanctioned carnage, you still, have not been attacked. You choose what role you take on.”

“How is it possible that for so many, their first & only concern is whiteness and the power to keep killing with impunity?”

“There is no American epidemic of white people being killed, by anyone. Why would there need to be? #KeepGraspingForFalseEquivalenciesThough”

“Wearing an Irish or Italian Pride tee shirt would never offend you. But Black folks expressing general esteem or citizenship does? Why?”

“Blackness has never been a threat to whiteness. Whiteness has always actively threatened blackness. This is not a matter of opinion.”

“White people have played a crucial role in nearly every social justice movement in this country. Indifference is not your duty or heritage.”

“You need not carry the heavy, hollow burden of racism any longer. Leave it behind. Be for something, and not because it’s easy.”

Williams’ social media presence has given folks more details about the current state of Ferguson and what’s currently going on with protests and racially-charged case of Brown’s shooting.