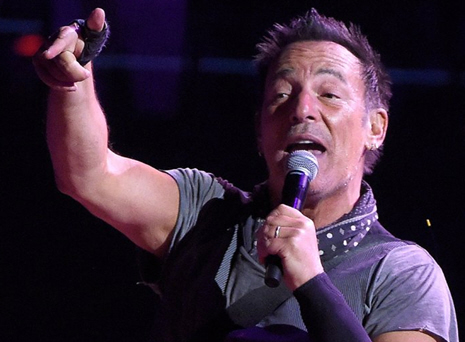 The backlash against North Carolina’s law banning anti-discrimination ordinances kept going unabated Friday, as Bruce Springsteen announced that he was canceling a weekend show in the state in solidarity with those protesting the bill.
Springsteen and the E Street Band were scheduled to perform at the Greensboro Coliseum on Sunday night as part of their current tour, which continues in the United States this month and heads to Europe in May.
On Friday afternoon, Springsteen released a statement saying that he could no longer play the show.
“Some things are more important than a rock show and this fight against prejudice and bigotry — which is happening as I write — is one of them,” Springsteen said in the message posted on his website. “It is the strongest means I have for raising my voice in opposition to those who continue to push us backwards instead of forwards.”
Springsteen’s stance comes as a host of major businesses and organizations have criticized North Carolina’s law, which prohibits transgender people from using bathrooms that don’t match the gender they were assigned at birth. This legislation also bans local governments from extending civil rights protections to gay and transgender people.
Earlier this week, PayPal announced that it would no longer open a facility in Charlotte due to the law. State officials had said PayPal’s facility would have pumped millions into the local economy by next year and employed 400 people.
Battles are erupting nationwide over gay rights and other social issues, fights that have repeatedly seen big business groups and entertainment figures square off with social conservatives.
Springsteen said Friday that North Carolina’s law was an “attempt by people who cannot stand the progress our country has made in recognizing the human rights of all of our citizens to overturn that progress,” and praised the people fighting the legislation.
“I feel that this is a time for me and the band to show solidarity for those freedom fighters,” Springsteen said. “As a result, and with deepest apologies to our dedicated fans in Greensboro, we have canceled our show scheduled for Sunday, April 10th.”
People who bought tickets would get refunds, Springsteen said.
Officials told local media outlets that the cancellation would cost the Greensboro Coliseum as much as $100,000.
The North Carolina law was hastily introduced last month by state lawmakers as a way to override a civil rights ordinance passed in Charlotte to allow transgender people in that city to use bathrooms corresponding with their gender identity. Gov. Pat McCrory (R) signed the state measure, praising it as needed “to stop this breach of basic privacy and etiquette” in Charlotte.
This law has come under considerable criticism from LGBT rights groups and a wide array of companies, including including Apple, Google and American Airlines. It could also cost the state other economic opportunities in the future. The NBA suggested it was considering moving its next All-Star game — scheduled to take place in Charlotte in 2017 — because of the law.
Supporters of the legislation have defended it and similar bills as common sense measures and have criticized the people unhappy with the law. The Rev. Franklin Graham, an evangelist in North Carolina, decried PayPal as hypocritical earlier this week and wrote on Facebook that lawmakers supporting the legislation should “stand strong against the attacks of this wicked agenda.”