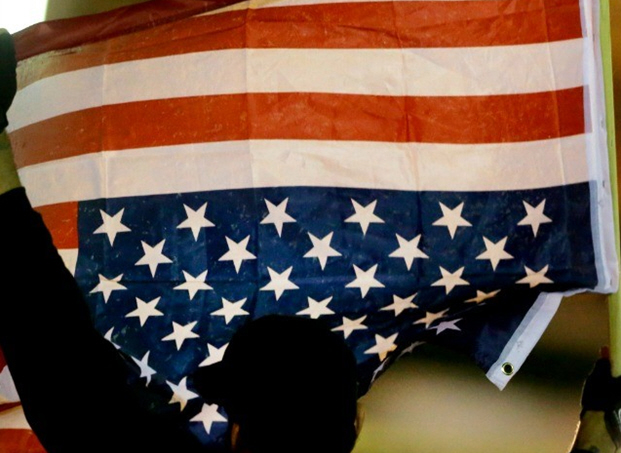 Irvine, California — Students at the University of California Irvine (UCI) spoke to Breitbart News Sunday, sharing their shock and disappointment at recent legislation by six members of UCI’s Associated Students (ASUCI) to remove an American flag from their building’s lobby this past Thursday.
A student who spoke with Breitbart News on condition of anonymity that she heard a member of the ASUCI discussing “the [American] flag and how it triggered people.” She then said she believed a major line of reasoning behind the legislation to remove the flag could have been a “precautionary step” to prevent a trigger situation where if someone is an “illegal citizen or [they] have citizenship issues, it makes them feel bad.
“But me and my friends were like, ‘Dude, you’re in America. It’s the American flag,’” she added.
The issue, according to her, was that the flag was placed in a common space, and she felt that if it were placed in a private area like a personal office, it would not have been a big deal. “And then there were people who were like ‘the flag triggers me’ — that was their exact wording, too.”
She added: “Everything can be a trigger. How far is it going to go? If everyone says something bothers them about a shared space then that could be a problem because then there will be nothing on any walls.”
UCI student Matthew Guevara, who sits on the Student Association board, authored the resolution (R50-70) to ban the U.S. flag from the association’s lobby wall. The resolution passed narrowly on Thursday in a 6-4 vote in favor, with two abstentions, but was overturned and vetoed on Saturday during a private meeting held by the Associated Student’s Executive Cabinet by a 4-1 vote.
UCI administrators also issued a statement on Saturday following the vote to ban the flag, stating that they do not endorse what they described as a misguided decision” by a political minority that they claim is not representative of the school nor the broader student body.
An anonymous student told Breitbart that the removal of the flag took place “respectfully. They folded it in the military style and wrote a little note saying they didn’t want it up.” However, she said, she and her peers were still shocked..
“I don’t think they properly represent the interests of average students,” said Chris, a recent UCI graduate who did not want his last name to be used. He said that schools “talk about how America is a patriarchal and colonial power and all the bad stuff but they totally miss the good stuff about this country.”
Chris told Breitbart that he found it “frustrating to see how ASUCI is using our money… and this legislation highlights that. This has no relevance to average students’ lives or what we’re doing on campus, so it just feels like a waste of our time and money.”
UC Irvine is a publicly-funded university. On Friday, State Senator Janet Nyugen (R-Orange County) she was considering the introduction of a state constitutional amendment to prohibit “state-funded universities and college campuses from banning the United States flag.”
Follow Adelle Nazarian on Twitter: @AdelleNaz