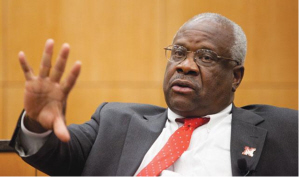 In a blistering dissent to the U.S. Supreme Court’s ruling on Alabama’s legislative districts, Justice Clarence Thomas said Congress, courts and the Department of Justice have put states in a bind with policies that are in conflict with “our color-blind Constitution.”

Thomas dissented in Wednesday’s 5-4 opinion that vacated a lower court decision upholding Alabama’s districts, drawn by the Republican majority in the Legislature in 2012.

The Supreme Court ruled that the three-judge district court in Alabama applied the wrong legal standards in its 2-1 decision to uphold the plan in 2013.

The justices ordered the district court to reconsider the claims of the Legislative Black Caucus, the Alabama Democratic Conference and others, including their claim that the maps violate equal protection by packing black voters into majority black districts, reducing the influence of black voters in other districts.

“We have somehow arrived at a place where the parties agree that Alabama’s legislative districts should be fine-tuned to achieve some ‘optimal’ result with respect to black voting power; the only disagreement is about what percentage of blacks should be placed in those optimized districts,” Thomas wrote.

“This is nothing more than a fight over the ‘best’ racial quota.”

Thomas wrote that court rulings, DOJ policies and amendments to the Voting Rights Act created a rigid framework in which states must preserve the number of safe minority districts while not diluting influence of African American voters in the other districts.

“I do not pretend that Alabama is blameless when it comes to its sordid history of racial politics,” Thomas wrote. “But, today the State is not the one that is culpable. Its redistricting effort was indeed tainted, but it was tainted by our voting rights jurisprudence and the uses to which the Voting Rights Act has been put.”

Thomas traced over decades the history of what he described as a misguided system, saying that it began with the Supreme Court’s “expansive” interpretation of sections of the Voting Rights Act, which he said were not intended to apply to redistricting.

WASHINGTON — The Supreme Court on Wednesday sided with black and Democratic lawmakers in Alabama who said the State Legislature had relied too heavily on race in its 2012 state redistricting by maintaining high concentrations of black voters in some districts.

The vote was 5 to 4, with Justice Anthony M. Kennedy joining the court’s four more liberal members to form a majority.

Justice Stephen G. Breyer, writing for the majority, said a lower court had erred in considering the case on a statewide basis rather than district by district. He added that the lower court had placed too much emphasis on making sure that districts had equal populations and had been “too mechanical” in maintaining existing percentages of black voters.

The Supreme Court vacated the lower court’s ruling and sent the two consolidated cases — Alabama Legislative Black Caucus v. Alabama, No. 13-895, and Alabama Democratic Conference v. Alabama, No. 13-1138 — back to it for reconsideration.

Richard L. Hasen, an expert on election law at the University of California, Irvine, said Wednesday’s decision might represent only a short-term victory for the plaintiffs.

“But do not be surprised,” he continued, “if Alabama pre-empts the lawsuit by drawing new districts which are less racially conscious but still constitute a partisan gerrymander which helps the Republicans have greater control over the Alabama legislative districts.”

In dissent, Justice Antonin Scalia said the decision was “a sweeping holding that will have profound implications for the constitutional ideal of one person, one vote, for the future of the Voting Rights Act of 1965, and for the primacy of the state in managing its own elections.”

The 2012 maps were challenged by the Alabama Legislative Black Caucus, the Alabama Democratic Conference and other plaintiffs. They said Republican state legislators had engaged in “racial gerrymandering” by paying too much attention to making districts almost identical in population and by making sure that substantial black majorities in existing districts were not even slightly diminished.

In defending the legislative maps, state officials have said they had to maintain the high concentrations to comply with Section 5 of the federal Voting Rights Act, which they said barred any diminution of the black population in particular districts. The Supreme Court effectively struck down Section 5 in 2013.

A divided three-judge Federal District Court panel ruled that the redistricting plan was lawful. Judge William H. Pryor Jr., writing for the majority, said that black voters in Alabama were politically active and had been successful in electing their favored candidates.

In dissent, Judge Myron H. Thompson said “there is a cruel irony to these cases” in light of the Supreme Court’s 2013 decision.

“Even as it was asking the Supreme Court to strike down” part of the Voting Rights Act, Judge Thompson wrote, “the state of Alabama was relying on racial quotas with absolutely no evidence that they had anything to do with current conditions, and seeking to justify those quotas with the very provision it was helping to render inert.”