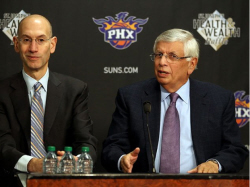 The NBA started preventing high school stars from jumping straight to the league in 2005, requiring that entrants to its draft be at least 19 years old during the draft’s calendar year and one NBA season to have elapsed since the player graduated from high school (also known as the “one-and-done rule“).

Since 2006, only 68 players have made the leap after finishing their freshman year, a path Duke’s Jahlil Okafor, Kentucky’s Karl-Anthony Towns and Ohio State’s D’Angelo Russell will almost certainly take.  However, not all have been successful in the NBA.

According to the metric win shares per 48 minutes, a one-and-done player selected in the top five is almost twice as effective at the NBA level than those in the bottom half of the top 10 and beyond. And the drop off from the first five picks to the next five is much more severe than their peers.

In a conversation with USA Today’s Sam Amick, Silver explains his rationale behind raising the age limit. Very little of his argument directly ties in the effect on college basketball — and why would it, considering his primary concern is the NBA — but it is easy to follow his logic in regards to player development.

Q: Along those lines, what’s your level of optimism when it comes to your goal of raising the minimum age to 20 (years old from 19 when the next CBA is negotiated, likely when there’s an opt-out after the 2016-17 season)?

A: It’s hard to tell. I never quite understood the player opposition. Of course it’s a zero sum game in terms of numbers of jobs, and amount of salary we pay out. We pay out roughly 50% of BRI (basketball-related income), and that’s divided among the players in the league. So there is absolutely, and by definition can’t be, a financial savings to us by increasing the age to 20. It has been our belief that we have a better chance to grow the (financial) pie that gets divided 50-50 if we increase the age and create, in essence, a more competitive league. And it has been our sense for a long time that our draft would be more competitive if our teams had an opportunity to see these players play an additional year, whether it be in college or professionally in the Development League or overseas.

We believe the additional year of maturity would be meaningful. And increasingly, I’ve been told by many NBA coaches that one of the issues with the younger guys coming into the league is they’ve never had an opportunity to lead. By having come directly out of their first year of college, those are the moments in their lives where…they were put in positions as upper classmen, where they first learned how to lead teammates. And ultimately, if you look at our most successful teams, they’re successful because they play as a team and I think that’s one of the beauties of this game is that it’s such an interesting mix of team play and at the same time individual (skill).

A team plays together with individual attributes. It’s that blend that teams are always constantly trying to achieve, the perfect blend. Again though, it’s one of those issues (where) it needs to be collectively bargained, and for good reason. It’s something that during collective bargaining the last time, we had lots of discussions about it with the group of players who were representing the union at the time and I think it’s something that we should continue to discuss. Let me just throw in that at the same time, I think maybe, just to broaden my horizons a little bit, I’m trying to look at it not just from the perspective of the NBA because I believe strong college basketball is also beneficial to the NBA and to the game generally. So even if it’s not terrible for the NBA right now, at least talking to a lot of my college coaching friends and college (athletic director) friends, their view is (that) one and done is a disaster. I think this is one of these issues that the larger basketball community needs to come together and address, not just the NBA owners and our players. Youth basketball and college basketball should have a seat at the table as well.

Before and after Kentucky took a 38-0 record to the Final Four and before Duke defeated a veteran Wisconsin team for the NCAA title on Monday, NBA commissioner Adam Silver remained adamantly opposed to the one-and-done college basketball outline.

Silver, who succeeded David Stern as the league commissioner in 2014, repeatedly has summed up the one-and-done phenomenon as a “disaster,” and he reaffirmed his stance this week.

But college fans who also dislike the one-and-done era need to know there’s a huge difference between what Duke grad Silver says and what NBA team owners have done and are likely to do in conjunction with the players union.

Both of those groups, who basically create NBA rules on and off the court, have given no indication at all that the one-and-one era will end when their current collective bargaining agreement expires after the 2016-17 season.

Not only do most owners like the system, they need it to save a lot of money on detailed, in-depth scouting.

Just as important – maybe more so – is that one-and-done gives those owners valuable defense against making the sort of humiliating draft-day selection blunders that enrage fans and alarm advertisers.

By forcing most of the top-rated high school players to go through one season of college competition – usually in the most successful, best-coached programs – owners get the sort of free live-fire auditioning they could never get from having their scouts watch high school games.

Those owners need no more reminder of what drafting players straight out of high school can create than the 2005 draft, the last before one-and-one rules came along.

Nine high schoolers – three first-rounders, six second-rounders –were picked in ’05. All nine have panned out to be so-so pros, at best.

By 2008, when the one-and-done trend was firmly in place, the draft included college freshmen Derrick Rose (Memphis), Kevin Love (UCLA) and Eric Gordon (Indiana), among others.

What the owners saw – really knew all along – is that for each LeBron James and Dwight Howard, high school drafting can deliver a Travis Outlaw, Kendrick Perkins and Kwame Brown.

Then there’s the most important one-and-done fringe benefit of all for the NBA – the enormous popularity of the NCAA Tournament.

Compared to March Madness in terms of coast-to-coast popularity, the NBA playoffs are the awkward tail on the basketball kite, a grueling and often boring marathon that begins in mid-April and doesn’t end until early June.

Nothing grabs the country’s sports center stage with the sizzle of the college postseason. For NBA owners, it’s the sort of player lime-lighting and free marketing that no amount of PR money could come close to duplicating.

In mid-February, for instance, Justise Winslow was just another name in Duke box scores. But by the time the Blue Devils got to Indianapolis last week, Winslow’s NCAA performances had made his just as much of a sports luminary as teammate Jahlil Okafor, Kentucky’s Karl-Anthony Towns and Wisconsin senior Frank Kaminsky.

And if the owners are addicted to the fruits of March exposure, player agents are hooked more.

If Winslow turns pro, as expected, his player rep will be negotiating entirely from a power stance – even in a salary slotting system. The agent who signs Winslow lands a bona fide sports celebrity, thanks entirely to one year in college in a high-profile program that reached the Final Four and then won it all.

Since those same agents represent and counsel the players already in the NBA union, it’s only good business for the agents to advise their clients to support the one-and-done status quo. It’s an endless business resource.

And since most NBA veterans already are financially set for life, they tend to be ambivalent about putting a great deal of energy into any sort of policy change.

We end up with an equation in which the agents indirectly control the union and the owners have a lot more to gain than lose by changing one-and-done rules.

There’s probably no end in sight, even after the next collective bargaining agreement is signed.