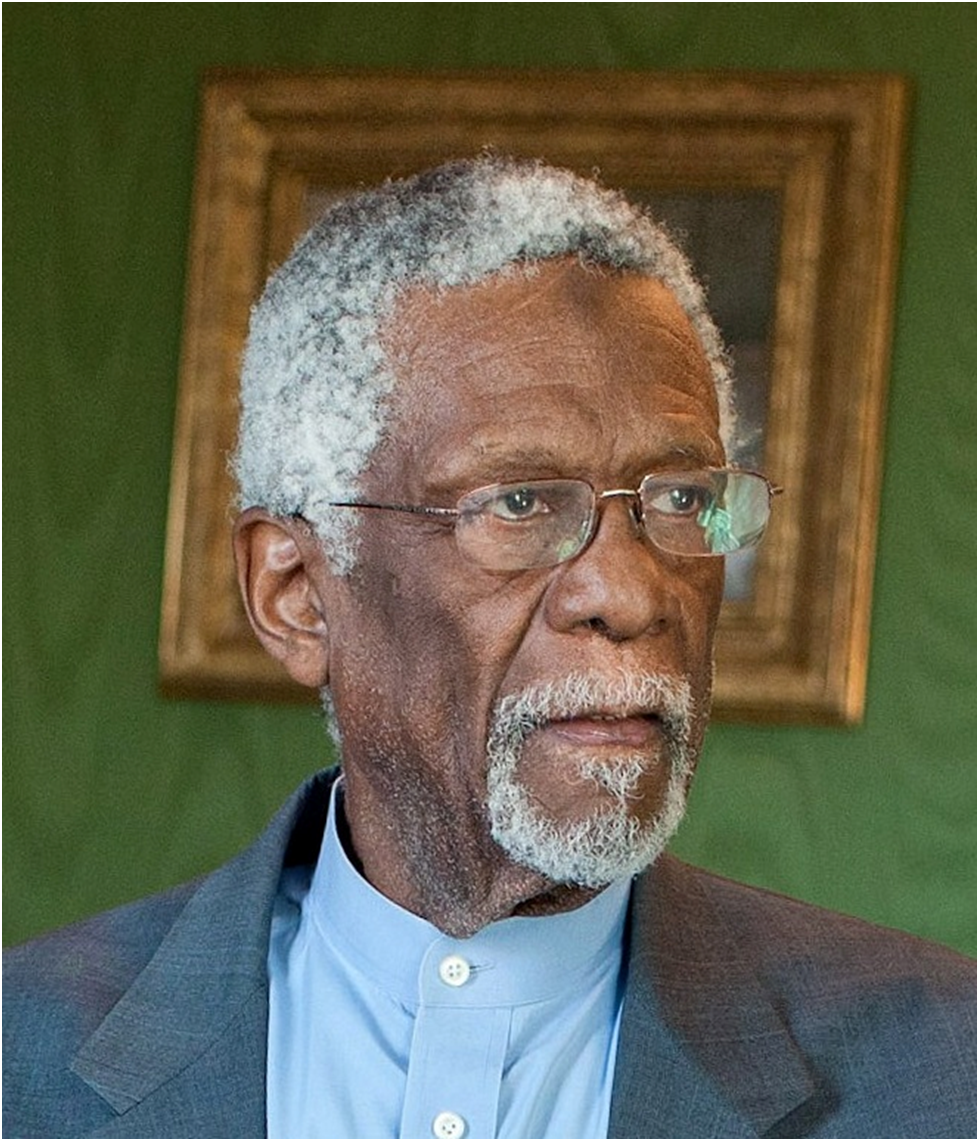 In a ceremony held in empty Boston Garden prior to the game against New York Knicks, the Celtics retired the number of former star Bill Russell on March 12, 1972. Participating in the ceremony were, from left, Celtics John Havlicek, general manager Man Red Auerbach, coach Tom Heinsohn, and players Don Chaney and Tom Sanders. –Globe Archives 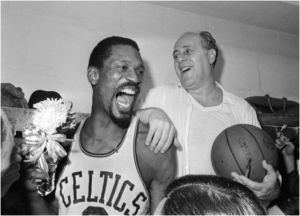 On May 26, 1999, the Celtics held a number retirement ceremony for legendary center Bill Russell. The event was emceed by Bill Cosby, and the deep list of luminaries included NBA greats Wilt Chamberlain, Kareem Abdul-Jabbar, and Oscar Robertson.

Near the conclusion of the nearly three-hour program at the FleetCenter, Russell and Celtics vice chairman Red Auerbach stood on the parquet floor next to a banner displaying Russell’s famed No. 6. The two tugged on a rope and sent the white flag with the green numbers on it to the arena’s upper reaches. The standing ovation Russell received brought him to tears.

It was a stirring day but it was also quite unusual, because the Celtics were raising a number to the rafters that had already been up there for more than 27 years. Numbers typically are not retired twice. 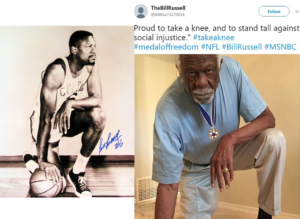 Russell’s life was marked by an uphill battle against racism and controversial actions and statements in response to perceived racism. As a child, the young Russell witnessed how his parents were victims of racial abuse, and the family eventually moved into government housing projects to escape the daily torrent of bigotry. When he later became a standout amateur basketball player at USF, Russell recalled how he and his few fellow black colleagues were jeered by white students.[  Even after he became a star on the Boston Celtics, Russell was the victim of racial abuse. When the NBA All-Stars toured the U.S. in the 1958 offseason, white hotel owners in segregated North Carolina denied rooms to Russell and his black teammates, causing him to later write in his memoir Go Up for Glory, “It stood out, a wall which understanding cannot penetrate. You are a Negro. You are less. It covered every area. A living, smarting, hurting, smelling, greasy substance which covered you. A morass to fight from.” Before the 1961–62 season, Russell’s team was scheduled to play in an exhibition game in Lexington, Kentucky, when Russell and his black teammates were refused service at a local restaurant. He and the other black teammates refused to play in the exhibition game and flew home, drawing a great deal of controversy and publicity.

As a consequence, Russell was extremely sensitive to all racial prejudice: according to Taylor, he often perceived insults even if others did not. He was active in the Black Power movement and supported Muhammad Ali’s decision to refuse to be drafted.  He was often called “Felton X”, presumably in the tradition of the Nation of Islam’s practice of replacing a European slave name with an “X”, and even purchased land in Liberia.  Russell’s public statements became increasingly militant, so far that he was quoted in a 1963 Sports Illustrated interview with the words: “I dislike most white people because they are people … I like most blacks because I am black”; however, Russell articulated these views with a measure of self-criticism: “I consider this a deficiency in myself—maybe. If I looked at it objectively, detached myself, it would be a deficiency.” However, when his white Celtics teammate Frank Ramsey asked whether he hated him, Russell claimed to be misquoted, but few believed it.

According to Taylor, Russell discounted the fact that his career was facilitated by white people who were proven anti-racists, namely his white high school coach George Powles (the person who encouraged him to play basketball), his white college coach Phil Woolpert (who integrated USF basketball), white Celtics coach Red Auerbach (who is regarded as an anti-racist pioneer and made him the first black NBA coach), and white Celtics owner Walter A. Brown, who gave him a high $24,000 rookie contract, just $1,000 shy of the top earning veteran Bob Cousy.

On the other hand, Russell in the above-quoted 1963 Sports Illustrated article said he had “never met a finer person [than George Powles]… I owe so much to him it’s impossible to express”;  and has (years after Taylor’s book) published an autobiographical account Red and Me the subject of which is his lifelong friendship with Auerbach. Bill Bradley for the New York Times Book Review wrote of Red and Me “Bill Russell is a private, complex man, but on the subject of his love of Red Auerbach and his Celtic teammates, he’s loud and clear.”  In the book itself Russell wrote “Whenever I leave the Celtics locker room, even Heaven wouldn’t be good enough because anywhere else is a step down… With Red [Auerbach] and Walter Brown, I was the freest athlete on the planet. I could always be myself with them and they were always there for me.”  Describing the Celtics organization (as distinguished from Boston sports fans in the 1950s and 1960s) as very progressive racially, Russell in 2010 recalled a list of the organization’s accomplishments on racial progress both in terms of objective milestones and his own subjective experience as a member of the organization:

And so [Walter Brown,] the… guy that owned the Celtics[,] was [in addition to Auerbach for whom Russell expressed “respect” and “actual love”] another one of the fine, good, and decent human beings that I’ve ever encountered… When the [Celtics] drafted Chuck Cooper and they came into Washington, D.C. to sign his contract, Walter Brown the owner of the team walked up to him and said ‘Mr. Cooper, the Boston Celtics will never embarrass you.’ That’s the first thing Walter Brown said to Chuck Cooper. And that’s the kind of guy [Brown] was.

And so the Celtics—all we looked for was: ‘Can he play?’ And what we would do is—[Auerbach] trusted all his players—so like when he’d make a coaching decision, he could talk: he talked to [Bob] Cousey [who is white], he talked to me [black], he talked to [Bill] Sharman [white], he talked to Sam [Jones] [black]—all of us: “What do you think?”. [Auerbach would] get the information from us and then make a decision based on that information and his thoughts. So we never, or at least I never, ever considered him as having ulterior motives for whatever he did.

In a 1966 press conference on his promotion to coach, Russell was asked “As the first Negro head coach in a major league sport, can you do the job impartially without any racial prejudice in reverse?” He replied “Yes.” The reporter asked, “How?” Russell replied, “Because the most important factor is respect. And in basketball I respect a man for his ability, period.”

As a result of repeated racial bigotry, Russell refused to respond to fan acclaim or friendship from his neighbors, thinking it was insincere and hypocritical. This attitude contributed to his legendarily bad rapport with fans and journalists.  He alienated Celtics fans by saying, “You owe the public the same it owes you, nothing! I refuse to smile and be nice to the kiddies.” This supported the opinion of many white fans that Russell (who was by then the highest-paid Celtic) was egotistical, paranoid and hypocritical. The already hostile atmosphere between Russell and Boston hit its apex when vandals broke into his house, covered the walls with racist graffiti, damaged his trophies and defecated in the beds.  In response, Russell described Boston as a “flea market of racism”.  In King Of The Court by Aram Goudsouzian, he was quoted saying, “From my very first year I thought of myself as playing for the Celtics, not for Boston. The fans could do or think whatever they wanted.”  Referring to a time when the Celtics could not sell out the Boston Garden despite hockey’s popularity in the same stadium, Russell recalled “We [the Celtics] did a survey about what we could do to improve attendance. Over 50 percent of responses said ‘There’s too many black players.’”  In retirement, Russell described the Boston press as corrupt and racist; in response, Boston sports journalist Larry Claflin claimed that Russell himself was the real racist.

The FBI maintained a file on Russell; this lends credibility to his observations that racism was an active force against him. The FBI described Russell in his file as “an arrogant Negro who won’t sign autographs for white children”. This clearly denotes a hostile attitude, and gives insight into the nature of Russell’s public persona, which was often perceived by the mostly-white media as overly harsh. (Note also, Russell signs autographs for white children.

Russell refused to attend the ceremony when his #6 jersey was retired in 1972, or his induction into the Hall of Fame in 1975. While Russell still has sore feelings towards the city, there has been something of a reconciliation; and he has even visited the city regularly in recent years, something he never did in the years immediately after his retirement.  When Russell originally retired, he demanded that his jersey be retired in an empty Boston Garden. In 1995, the Celtics left Boston Garden and entered the FleetCenter, now the TD Garden, and as the main festive act, the Boston organization wanted to re-retire Russell’s jersey in front of a sellout audience.  Perennially wary of what he long perceived as the racist city of Boston, Russell decided to make amends and gave his approval. On May 6, 1999, the Celtics re-retired Russell’s jersey in a ceremony attended by his on-court rival (and friend) Chamberlain, along with Celtics legend Larry Bird and Hall of Famer Kareem Abdul-Jabbar. The crowd gave Russell a prolonged standing ovation, which brought tears to his eyes.  He thanked Chamberlain for taking him to the limit and “making [him] a better player” and the crowd for “allowing [him] to be a part of their lives.” In December 2008, the We Are Boston Leadership Award was presented to Russell.

On September 26, 2017, Russell posted a photograph of himself to a previously unused Twitter account in which he was taking a knee in solidarity with NFL players kneeling during the US national anthem. Russell wore his Presidential Medal of Freedom, and the image was captioned with “Proud to take a knee, and to stand tall against social injustice.” In an interview with ESPN, Russell said he wanted the NFL players to know they weren’t alone. 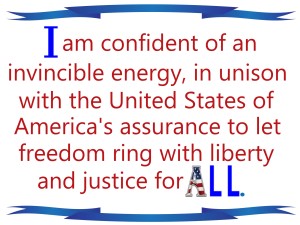