Like a Rorschach ink blot, different Atlanta residents are taking away different interpretations of a piece of street art painted on the side of a building depicting cartoon character Elmer Fudd with a shotgun in hand beneath a sign reading “Negro season.”

According to CBS46, the graffiti was painted on the side of a building housing Allied Barton — a security company that provides armed and uniformed security officers — and is just blocks away from an art school.

Unlike the cartoon Elmer Fudd, the artist’s rendition has Fudd in a cop’s uniform instead of hunting clothes and deer stalker hat.

While some residents see the artwork as racially motivated, encouraging police to gun down African Americans, others see it as mocking police as bumbling incompetents who hunt and kill innocent blacks.

“He’s definitely white,” another woman suggested of the artist. “I don’t see why somebody would want to do that if he was being racist to his own kind.”

Another woman said it might be a “political statement” from a Black Lives Matter activist.

“I’m seeing the police with a gun,” one woman said while looking at pictures of the painting. “And the sign says ‘Negro season’ which means that the police are killing the blacks.”

Another man was neutral on the intent of the artist — identified by a scrawled ‘MAES’ — appreciating the work no matter what the message. 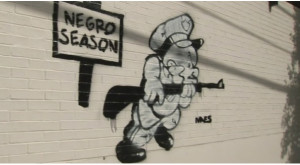