HONG KONG– Protesters have set a Thursday midnight deadline for Hong Kong’s Beijing-backed Chief Executive to step down and for the Communist government to grant election reforms on the semi-autonomous island. If their demands are not met, they say they will occupy government buildings.
The response from Beijing: a stern warning that Hong Kong risks a descent into “chaos” if the protests don’t end, and a clear message from a government official that the resignation demand would be “impossible” to meet.
CBS News’ Seth Doane says Hong Kong’s police warned Thursday of “serious consequences” if protesters attempt to occupy any buildings.
And with the showdown looming, the protesters renewed their threat, saying they would occupy Chief Executive Leung Chun-ying’s office at midnight if their demands were not met.
Hong Kong’s government has indicated it will allow the protests to continue as long as they’re peaceful, but with news of the protesters’ plans, police transported tear gas and rubber bullets to the Chief Executive’s office building. The building is right next to the Chinese army headquarters in Hong Kong, but several hours before the midnight deadline, there was no sign of increased activity by the army.
But on the streets, Doane says protesters were working hard to show a peaceful, disciplined side to the pro-democracy movement.
The protesters are policing themselves, says Doane, and helping each other; whether it’s navigating barricades, offering water, a cooling spray of mist on the hot streets, or even a free haircut. Uniformed police, as of early Thursday evening, were hanging back.
Barry Hoi, among the protesters, told Doane he thinks Beijing is unlikely to budge, but he and his fellow demonstrators still have hope, and discipline. Hoi said keeping the protest polite and civil was the best way to show that Hong Kong should be democratic.
Messages of support were being projected onto a building in plain sight of the protest, and they’ve also been pouring in from around the world. Outside the Chinese consular office in Manila on Thursday, Filipinos carried the symbol of this “umbrella revolution” and chanted “Hong Kong, be strong!”
Overnight, more than 100 New Yorkers rallied, too.
“I’m here to show support because my family members in Hong Kong are also part of the protests,” said Joy Lau, a demonstrator in Times Square. There were similar protests planned in about 40 cities across the U.S.
At a meeting Wednesday in Washington, Secretary of State John Kerry told China’s top diplomat the U.S. government has “high hopes that the Hong Kong authorities will exercise restraint and respect the protesters right to express their views peacefully.”
Earlier, Kerry had publicly called for Beijing to grant the “highest possible degree of autonomy” to Hong Kong.
As CBS News’ Margaret Brennan reported, however, there was no mistakingBeijing’s reply to Kerry: back off.
Foreign Minister Wang Yi clearly told Kerry that the U.S. should not meddle in the situation in Hong Kong.
“Hong Kong affairs are China’s internal affairs. All countries should respect China’s sovereignty,” Wang told Kerry in a photo spray immediately preceding their closed-door meeting at the State Department. Wang is the highest ranking Chinese official to speak openly about the protests, which Beijing considers to be “illegal.”
China is watching the protests closely. Earlier this week, Doane says, a U.S. security firm alleged on its website that the Chinese government may be using spyware to monitor protesters.
Protesters Winnie Law showed Doane an app on her phone that protesters have been using. It’s called “FireChat,” and the California-based creator claims more than 100,000 people downloaded the app it in just 24 hours as the Hong Kong protests ramped up.
REUTERS
It works using peer-to-peer wifi, creating a sort of pseudo mobile network which can enable communications in congested areas when cell signals get jammed.
Asked why she downloaded the U.S.-made “Firechat” app, Law told CBS News she did it “because my friend told me the protesters are sharing information” using the smart phone software.
Doane spoke with several tourists from Mainland China on Thursday who said the current demonstration has the power to raise democratic awareness back in the mainland — which is exactly what the Chinese government does not want.
Incidentally, they were too scared to say it on camera. 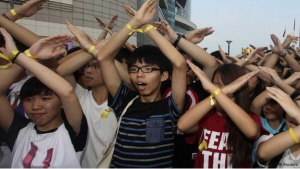