These two tiny, yet large, American retro lines of thinking just came to my attention and it really sends home the backward minds too many Americans spend time with.  These are particularly interesting as they take place in schools, whereas, any adult associated with encouraging the custuming activity in this KKK brand is unqualified to be part of an education system or process. 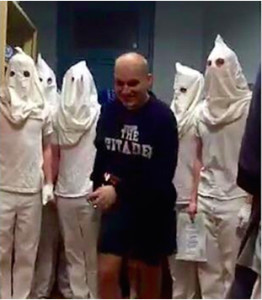 The Rev. Al Sharpton and the National Action Network (NAN) say they have rescinded their request for the resignation of Lt. Gen. (rtd.) John Rosa, president of The Citadel, a military college in South Carolina.

Sharpton had called for Rosa’s resignation over a scandal involving Citadel students who were pictured wearing KKK-like outfits. The students claim they were singing Christmas carols as part of a “Ghost of Christmas Past” skit, but Sharpton branded their behavior a “display of race hatred,” according to local ABC affiliate WCSC. Sharpton also complained about the Confederate flag hanging in The Citadel’s Summerall Chapel.

But NAN changed its mind after meeting with Rosa.

“After having this meeting, we feel very comfortable in saying that the National Action Network and Lt. Gen. John Rosa will come together to overcome and erase the racial stigma that has shadowed our city,” the organization said in a release. “We will come together to ensure that the dignity and respect of each citizen on the campus is upheld regardless of race, creed or gender.” 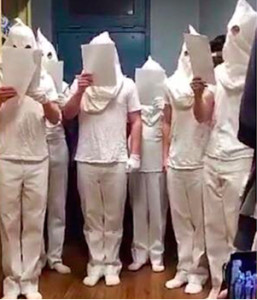 The Citadel has taken swift action against the eight cadets involved in the incident, who have been suspended until Jan. 13. The cadets will also face a hearing, where Rosa will recommend disciplinary action. Rosa has also called on Dr. Lamont Melvin, chairman of the Citadel Minority Alumni Association (CMAA,) to assist in the hearing.

“I invited Dr. Melvin to be a part of this process to provide transparency, but, more importantly, to work together to build a learning environment where all cadets, no matter their background, can thrive at The Citadel,” Rosa said in a statement.

The CMMA posted a picture of the cadets wearing pillow cases with eye hole slits to its Facebook page, demanding The Citadel take action.

“This is not the first, second or third time that racially charged events have been documented to have occurred at The Citadel,” said Melvin in a statement. “It is easy to try to isolate events of this sort to a single item or incident, which would, on its face, be a disservice to minority cadets who have and are currently attending The Citadel. This issue is much bigger. It’s a cultural issue and it must be addressed and it must end now. When racist acts occur on campus, ALL students, black and white should feel the same degree of outrage that we do.” 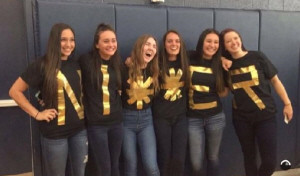 OK, so you’ve most likely heard about the group of attention-starved Caucasian girls, all seniors at Desert Vista High School in Phoenix, Arizona, who set social media on fire when they decided to pose for and upload a photo of themselves wearing black T-shirts, each emblazoned with a shiny gold letter that, when standing together, reads the N-word, right?

Now, feeling pressured to DO SOMETHING, a school district official released a somewhat safe-sounding statement that the six girls involved in the incident are facing disciplinary action.

“The students will be disciplined in accordance with district policy and while we don’t discuss specific discipline I can tell you that will be addressing the obvious need for sensitivity training in this case,” the official said.

I train people all the time. You can’t TRAIN somebody to be sensitive. Either they are already or they are not.

Sensitivity training on these stupid, giggly little twits would be a waste of some trainer’s time and employers money. They are old enough and knew exactly what they were doing. Trying to get attention. That’s why they uploaded the photo.

Six students at Desert Vista High School in Ahwatukee — a suburb of Phoenix, Arizona — took a picture proudly wearing shirts spelling out a racial slur that swept through social media this Friday.

The students can be seen here wearing shirts that, when standing side by side, spells the N word.

The students wore these shirts on the day of the senior class’s annual yearbook picture. Students are “allowed to wear pre-approved shirts with lettering or messages.” Their shirts were supposedly part of a larger message that reads “BEST * YOU’VE * EVER * SEEN * CLASS * OF *2016”.

No faculty member saw the offensive configuration of the lettered shirts until the picture surfaced online. A school spokeswoman told 12 News the photo was “unacceptable and does not represent the student body or the district.”

The school’s Black Student Union defiantly responded by tweeting a picture with a group of white and black students smiling together under the banner #thunderstrong. They also echoed the district’s sentiment that the six girls who wore the shirts spelling the racial slur do not reflect the Desert Vista High School student body.