If I had the opportunity to hire someone for the job I would prefer hiring someone who speaks Spanish.  This is fine if you want to alienate the rest of the English only speaking part of society.  If I were to say that I prefer hiring someone that only speaks Creole English language, then perhaps that would be okay too, since requesting a Spanish speaking person is acceptable by both private and public business organizations.

More and more job descriptions are being circulated without unlawful  obstruction.  The requests are routinely placing within the qualifications’ section that the candidate speak Spanish or be able to speak English and Spanish, without any outward need that the job have a bona fide occupational requirement to perform the described duties.

The ad depicted below was received today (12-1-14) from a California Employment Development Department representative, who is Hispanic.  If stacking the job candidate pool is okay for the public agencies, it is only natural that private businesses would be able to build their operation with the gender and race that they so desire.  Equal Employment Opportunity is a bias remedy that apparently has been discarded as obsolete.  We have obviously reached parity and the balance of hiring specific races is needed. 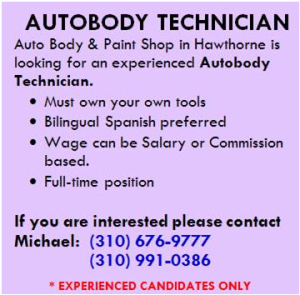 The sarcasm is plain, but the bias hiring issue is rampant in the Los Angeles region.  It is being thrown around for nearly every blue collar job.  I am not sure if I am more upset that Latinos are getting a huge break over black people, or if I am more upset about how Latinos are being used to take on jobs that apparently nobody else wants to do.

So, if over half of the population of a specific city is greater than 50%, it seems alright to request that the workers exceed that ratio.  The job seeker information is somewhat nebulous, consequently, one may want to not use this as the most common approach to racial discrimination in hiring practices.  There is obviously no shame in their game when it comes to equal opportunity hiring practices.