Donald Rumsfeld is a non-inclusive thinker when you air stupid statements about the President of the United States during a time of critical foriegn relations. Rumsfeld should know better which goes to the point of just how limited his tenure was with bringing a nation together whil he had such a long career in national postions. He served as the 13th Secretary of Defense from 1975 to 1977 under President Gerald Ford, and as the 21st Secretary of Defense from 2001 to 2006 under President George W. Bush. He is both the youngest and the oldest person to have served as Secretary of Defense. Additionally, Rumsfeld was a four-term U.S. Congressman from Illinois (1962–1969), Director of the Office of Economic Opportunity (1969–1970), Counsellor to the President (1969–1973), the United States Permanent Representative to NATO (1973–1974), and White House Chief of Staff (1974–1975).

So come on Rumsfeld, are you venting anger to avert your wrong doings when you were the man in Afghanistan? Times have changed and conditions have changed since you were around making strange decisions that got us there in the first place. The monkey reference is way too close to being a racial slur since when you expose the history of white rule in America blacks were frequently called monkeys, white men did not want to acknowledge the humanity of inclusion. Rumsfeld should consider issuing an apology or retraction as for now on I can only think that he has serious issues. 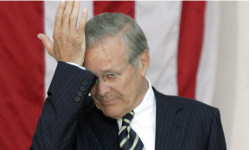