In 1967, the United States Supreme Court put an end to the prohibition of interracial marriage in the monumental case of Loving v. Virginia.

Richard P. Loving, and his wife Mildred, shown in this January 26, 1965 photograph, will file a suit at Federal Court in Richmond, Va., asking for permission to live as husband and wife in Virginia. Both are from Carolin County, south of Fredericksburg, Va., and were married in Washington in 1958. Upon their return the interracial couple was convicted under the state’s miscegenation law that bans mixed marriages. They received a suspended sentence on the condition they leave the state, but they now want to return to Virginia.

With fight for same-sex marriage such a regular point of conflict today, it’s easy to forget about the first fight for marriage equality: interracial marriage. But while anti-miscegenation laws may seem like a relic of the past, it wasn’t until 2000 that Alabama became the last state to adapt its constitutional laws on interracial marriage.

The case was sparked by Mildred Loving, née Jeter, who after discovering she was pregnant traveled with boyfriend Richard Loving and from their home in Virginia to Washington, D.C. They made the move to evade Virginia’s Racial Integrity Act of 1924, which prohibited them from marrying John was a white male while Mildred was black and Native American.

Five weeks after their nuptials, they returned to Virginia. An anonymous tip led to a police raid. Instead of finding them having sex, which was another criminal offense at the time, they caught them sleeping in their marital bed. The couple was taken to jail after Mildred pointed out their D.C. marriage certificate. It was used as evidence of “cohabiting as man and wife, against the peace and dignity of the Commonwealth.”

The Lovings were sentenced to one year in prison, but it was suspended on the condition that the couple leaves Virginia and not return together for 25 years.

Initially they did just that, but by 1963, Mildred had enough and decided to write to Attorney General Robert F. Kennedy. The letter inspired Kennedy to connect her with the ACLU, which took the case to the U.S. Supreme Court. On June 12th, 1967, the Court’s ruling declared all laws against interracial marriage in the United States to be unconstitutional. 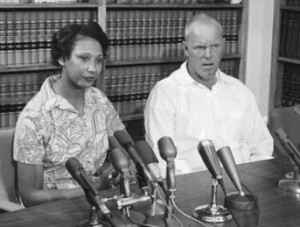 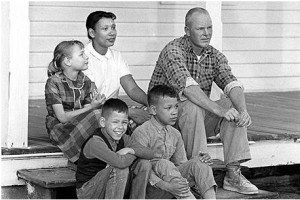