ESPN college football analyst David Pollack admitted he was about to put his foot in his mouth. Then he went right ahead and stuck it in there.

The former Georgia standout caused a stir during ESPN’s “College GameDay” on Saturday by saying that he doesn’t believe women belong on the College Football Playoff selection committee. The comment came just one day after The Associated Press reported that former U.S. Secretary of State Condoleezza Rice is expected to be a member of the committee that will select teams for the College Football Playoff next year.

“Now I’m going to stick my foot in my mouth, probably,” Pollack began. “I want people on this committee, guys, that can watch tape … Yes, that have played football, that are around football, that can tell you different teams, on tape, not on paper…”

As Pollack was explaining his stance that members of the committee should be former players, ESPN host Chris Fowler asked if such a requirement should preclude women from serving on the committee.

“So no woman belongs on the committee, then?” interjected Fowler.

Rather than avoid the question, Pollack took the bait.

“You said that … I’ll say it, yeah. Yeah,” he responded as other panelists stated that they disagreed.

As long as people think exclusive a collective society is impossible. A black man thinking exclusive has larger isses than they may believe. The content of a person’s character is the X-factor and selling yourself thinking short of not acquiring te most responsive partiapants places societal harmony on the bakc burner. In this case this means that a person who is incapable of playing the game due to a phyical abnormality would be prohibit from being a consideration on the football comittee. What’s flies into the wind is the old example is that Mark Spitz’s college coach could not swim, yet he successfully coached Mark to the US Olympics.

Take you foot our of mouth and brain. Think about the end game versus selecting the type of equipment needed until you learn the facts about the requirements of the job objectives. 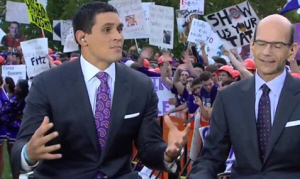